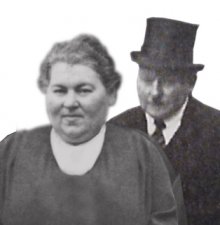 Helene was the third of the Humberg’s children. She lived in Velen with her husband, Abraham Frank, and her children, Edith and Siegfried, where they traded livestock and operated a kosher butchery. The family was on good terms with its neighbours, took part in festivities and social activities, and supported the hospital. Despite the forced closure of the butchery and their social isolation, Helene and Abraham remained in Velen. They were still able to find refuge with a friendly neighbour, Ferdinand Foecker, during Crystal Night in November 1938. In December 1941, they were deported to Riga where they were murdered.