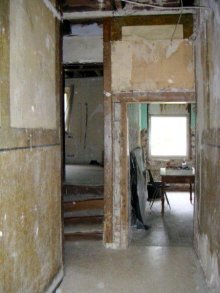 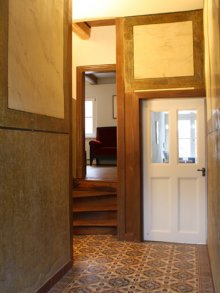 When the members of the Heimatverein Dingden e.V. began
the restoration of the Humberg House in 2001, they could
not have guessed the kind of undiscovered living environment
that would be found here. The house represented a rare stroke
of luck for the preservation of the cultural heritage. The inhabitants
and owners had carried out hardly any structural changes since 1941,
so a large number of authentic details of the occupation history
and the history of the house’s use and of Jewish life in Dingden have survived.

Among of the most impressive finds are the field stone and plaster
from the predecessor building with the initials “J N”, suggesting
the builder, Jakob Nienhaus, the kiln for the brewing of beer,
which probably belonged to the first Jewish inhabitant in the village,
Simon Cohen, and a very rare preserved private mikveh, a Jewish
ritual bath. The former colourations and wall ornaments have also
been able to be brought to light.

The Heimatverein Dingden e.V. abandoned the original project,
using the house as an extension of the adjoining Local History Museum, and created a living memorial to the history
of Jewish life in Dingden.

Thanks to the support of the Rhineland Regional Association, the
North Rhine-Westphalia Foundation and the Dusseldorf District Council, as well as the advice of the Rhineland Regional
Association’s Office for the Preservation of Field Monuments,
the renovation work was able to be completed in 2010. The details
revealed have been expertly renovated and partly restored. They
invite the visitor to empathise with the atmosphere of the house
around 1940 and hence, they represent the central aspect of the communication concept.

Notes for photography
-    Murals in the entry hall (imitating marble in various shades
of green. Chronologically, they match the dark green paint
with decorative lozenges in the retail shop)
-    Green painted walls in the butchery (the glossy green paint
is exactly 6’7¾” (2 metres) high, as the hygiene regulations,
tightened up in 1884, required in a butcher’s shop)
-    Hanging device in the butchery
-    Field stone and plaster with the initials “J”(akob) “N”(ienhaus)
-    Private mikveh
-    The remains of newspapers on the wall of the upkammer,
used as a foundation and as insulation for the wallpaper. These
date to the 1930s.
-    Imprint of a mezuzah, including in the last room. (The Hebrew word
means door post and describes a small capsule on the door post,
which contains an excerpt from the Book of Deuteronomy.
A mezuzah is always attached somewhat at an angle to the room.
One explanation for this is that only God can make things quite
right (straight), but not man, whose actions always remain
imperfect (askew).