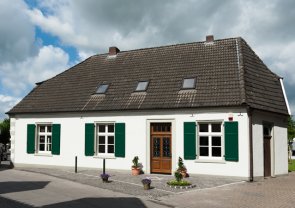 Since June 2012, The “Humberg House Historical Site, Dingden” has invited the public to discover this simple and, at the same time, moving story. The Humberg House is not a museum, but a place of remembrance, reflection and learning, where the past, the present and the future appear. An interactive media guide and guided tours and materials for school classes facilitate individual access.