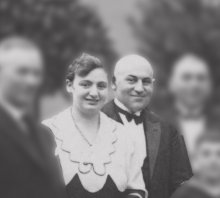 Wilhelm was the youngest of a family. In 1919, he moved in with his sister, Frieda, and his brother-in-law, Adolf Terhoch, in Ramsdorf. In 1926, he was the champion marksman in Ramsdorf. Following his marriage to Rosette, the family, with two daughters, lived in Borken, where Wilhelm worked as a cattle dealer. Early on, he is believed to have had “difficulties with the Nazis”, and so, in 1933, he moved to his wife's home town, Winterswijk in the Netherlands, where their third child, Jakob, was born. In July 1943, Wilhelm and his family were deported to Auschwitz. Rosette and her three children died just a few days after their arrival in Auschwitz. The circumstances of Wilhelm’s death in 1944 are unclear.