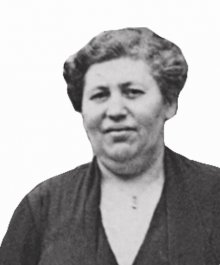 Johanna was the Humberg family’s oldest child. Because of her deafness, she found it difficult to keep up with the others. After 1913, she moved to Wesel, where she sold haberdashery door-to-door. Unmarried, Johanna kept in close contact with her family. She frequently visited her parents and her brother, Leopold, in Dingden. After 1939, she corresponded with her brother, Ernst, who had emigrated to Canada. In 1941, she was also deported to Riga and was probably murdered there.