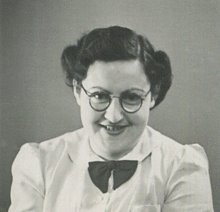 Edith was the only member of Abraham Frank’s family to survive the National Socialist pogrom. Although she was already 21 years of age, she still escaped to England in one of the so-called Kindertransports in 1939. There, initially, she lost her way. Edith is reported to have suffered from a psychological illness and to have spent some time undergoing treatment in hospital. Her condition improved in later years. In 1993 she visited her relatives in Canada. Edith died in England in 2000.