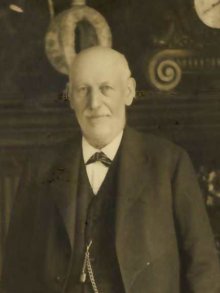 Abraham came from Klein-Reken, around 20 miles (30 kilometres) to the east of Dingden. He was a merchant, butcher and cattle dealer. In 1882, he married Rosalia Landau, who had inherited her aunt’s butchery and draper’s shop in Dingden. Abraham took an active part in the life of the village and of the Jewish congregation of Bocholt. He fought as a soldier in the Franco-German War of 1870 – 71 and subsequently joined the Dingden Veterans’ Association.

He died in August 1932, just a few months after this recording.